The Night Someone Called Me a N*gger… 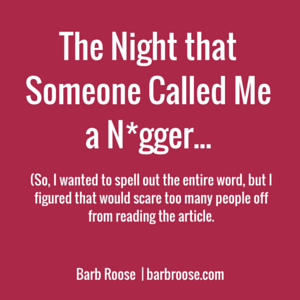 One night, I walked into a neighborhood pub. As soon as the door closed behind me, an unknown voice yelled: “What’s that nigger doing in here?”

Was someone talking about me?

I stopped. The room silenced. An electric pause buzzed the air.

My mind calculated what I’d just heard. Then, a thought:  Oh, I KNOW that he did not just say that to me.

Another moment passed. A volcano of rage started to bubble deep within. Let me take my shoes off. Earrings, too. Somebody – SOMEBODY, hold my purse.

That incident happened over 20 years ago, however, I remember it like yesterday. On that night, I walked in to enjoy some dinner. Except someone decided that I didn’t belong.

BUT based on my skin color, I was unacceptable.

I gazed around the room wondering if anyone would speak up or even say something – anything.

I held my head high, glided through the hushed crowd and took my seat at the table. Yes, I did.

I suspect that some of you are questioning, “Was it really that bad?” or “Are you sure?” You’re shocked that those things could have happened to me.

But they did. In my early adult years, I learned how to ignore the sales staff that helicoptered while I shopped for shoes. I learned the importance of not messing with my purse while browsing merchandise. I embraced driving 10 miles UNDER the speed limit in certain communities – especially if I was driving at night.

Those situations never shocked me, but I hesitated to recount them because of the shocked-responses from others. Racism thrives in part because it shocks the majority into disbelief. I’ve heard responses such as:

Unless you’ve been a direct victim or eyewitness of someone who’s experienced racism, stories about racism will always be shocking.

Yesterday, a cell phone camera captured police restraining an African-American man named Alton Sterling on the ground. Then, those same officers fatally shot Sterling while restraining him. Much of America is in shock. But, not those who’ve been wrestled to the ground like Sterling. Not those of us who’ve witnessed our fathers and brothers stopped for no reason, hassled or pulled from their cars. We’re not in shock. We’re a lot of things – angry and sad sums up a lot. It seems that each #shootingincident buries us deeper into the struggle over of the color of our skin and the fear that lurks within.

There’s nothing about our first-world mindset that wants to accept that racism could be just as pervasive as it was when men began wearing white sheets and Africans exited boats in chains. Apparently, we’re not as awesome as we think we are. Seriously, we discovered how to fly, found a vaccine for polio, developed a nuclear bomb, put a man on the moon, learned how to record on a VCR, taught Grandma how to use Facebook and elected a black man as president twice —

Yet, we can’t accept that racism is woven deeply into the fabric of our American experience.

In our mental model, racists hang out with murders or pedophiles. So, a racist couldn’t possibly be the fun neighbor up the street or the sales manager in your office. We don’t want to call someone a racist unless we can SEE them being racist.

You just thought that I called you racist. I didn’t. Only you can answer that. But,  I do want you to consider how you’ve been impacted by the roots of racism in your family of origin.

What you believe about race is influenced by the generations of conversations and experiences that happened long before you were born. Your great-grandparents sat and around the table and talked about race. Your grandparents heard them. Your parents heard your grandparents. You listened to your parents. I’m not saying that you agreed with all that was said, but you’ve got to be aware of how those words and stories influenced your thoughts, feelings or behaviors.

Some of you are tired of hearing people like me talk about ‘love.’ For you, love is for Valentine’s Day. Love is something that gets hot and heavy on Friday night. You don’t really believe that love is a potent power in our universe that can actually affect change. Maybe it’s because we really don’t know how to love. We’ve cheapened it and now, we think that the strategy of love has failed us. Except, our back-up plans of ignorance, hate and anger haven’t worked either.

I love Martin Luther King Jr’s vision for the future. He had hope because he believed in people. He believed in us! He knew that racism would never be eliminated by laws or lawsuits – even though he fought for legal and social justice. But Dr. King preached the same thing Jesus preached long ago: Unconditional love is the only road to the elimination of racism. Racism will die once our unconditional love for each other comes alive.

Love is not a feeling. Love is an action. Love is THE ONLY strategy that can save us from society-destructing ourselves. You’ve got to remove your limits on your love for people. Here’s the ultimate test for love: Decide now that you will lay down your life for another human, no matter their race or culture. When you decide to display that kind of love, then you carry the torch of hope for our tortured nation.

“I refuse to accept the view that mankind is so tragically bound to the starless midnight of racism and war that the bright daybreak of peace and brotherhood can never become a reality… I believe that unarmed truth and unconditional love will have the final word.”

Here’s the thing: We feed what we believe. As long as we believe that all black men might steal our purse or that all white people will stab us in the back, those lying labels will keep us far apart from each other. When we stop looking for evidence to feed our faulty beliefs, then we’ll be willing to open ourselves up.

What would it look like for you to develop a relationship with someone from another race? It’s more than having a “black friend at the office” or “having a white girl to roll with on Friday night.”  It means that you get to know someone well enough that you can talk about the things that matter in life. It means that you can agree to disagree –  still love each other. It means that you can come from different cultural or socioeconomic perspectives and still respect each other’s viewpoint, even though you may not completely understand it.

3. Start new conversations with your family

If you ever expect that future generations will move away from where we are today, then we have to give them a new target. Focusing them on the target of developing authentic relationships begins with authentic conversation.

How can you have new conversations with your kids or older family members?  Consider this:

Speaking out about race isn’t easy. Our experiences with race are just as personal as they are collective. So, thank you for stopping by and checking out this post. I’d love to hear your thoughts on how we as individuals can be the light of hope in American’s dark night of racism. Please leave a comment below.