What’s so hard about patience? 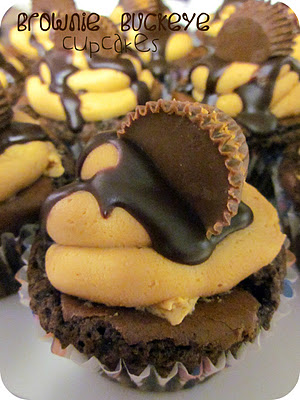 I struggle with patience. Not as much as I used to, but it stays on the top five of things I need to work on. So, I totally related to a hysterical video that I saw at the Catalyst Conference in Atlanta last month. It’s called the “Marshmallow Experiment” on YouTube and has over two million hits. You can watch it below.

This  video features school-aged kids who were given a marshmallow and told that if they waited patiently and didn’t eat the one marshmallow, they would receive another when the adult came back into the room.  Sounds easy? Not so much.

As soon as the adult left the room, the great struggle began. It wasn’t long before kids abandoned their sedate, calm postures and got all handsy. I giggled while watching these school-aged kids sniff, roll, poke or lick those cylinders of sugary goodness. They kept a guilty eye on the door because of fear of getting caught. But fear didn’t stop a few of those kids from giving up the wait and shoving those fluffy puffs into their mouths. 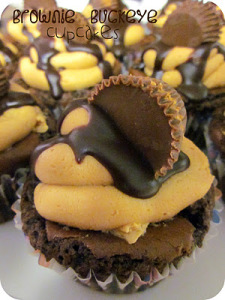 Oh My! Photo from sixsistersstuff.com

Could I sit in front that tray for 60 minutes and not touch, sniff or poke them? I think so. (But, if you and I ever sit in front to a platter of brownies together, you should know that I probably licked the tops of them before you sat down. #dibs)

While I would not eat the brownies, I’d spend those 60 minutes feeling the pressure that the intense wanting applied to my waiting. I would bareknuckle my waiting until I came up with a guilt-free, Holy-Spirit approved way to eat a few of those brownies before the clock expired. And if I wasn’t able to think of anything, I would blow on those brownies until a few cocoa-laced crumbs accidently fell off.

When Our Wanting Pressures Our Waiting

Remember the old saying “Good things come to those who wait”?  I hate that quote, mainly because if I know something good is waiting for me, then I want it now. I don’t want to have to wait for it. At times, patience feels like a head game. It can be confusing.  There are so many things that we want, but we’re often confused about how we are to wait for them.

Just so you know, I’ve been guilty of a few of these. Not proud of admitting that. Just keeping it real.

We all know what it feels like to wait month after month for something to happen, but that something doesn’t happen. He isn’t asking you out…The house isn’t selling…You’ve been unemployed for months.  Disappointment can chip away at our joy and our hope. 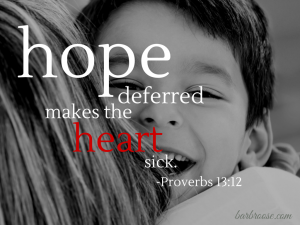 If we are not careful, our unfulfilled waiting desires will open like a giant sinkhole in our lives and suck the joy out of everything else. Has your waiting started to drain your joy?

In the Old Testament, there was a man named Abram (later changed to Abraham). He was married to a woman named Sarai (later changed to Sarah). God promised Abram that he would be the ancestor of many, many generations of people. Yet, Abram and Sarai had no biological children.

We often talk about this story from Abram’s perspective, but I like to think about Sarai. I think about Sarai and her waiting. She knew that God told her husband that they would have children. Yet, nothing happened. And Sarai struggled.

During that time, it wasn’t uncommon for a concubine (voluntary slave) to bear children for a barren wife.** A woman named Hagar was Sarai’s concubine. So, Sarai sent Hagar to Abram to get pregnant and bear a child, even though God told them otherwise. It seems that Sarai wanted to help God out, right? I can almost hear her thoughts, “Nothing is happening. I can’t get pregnant. God must have forgotten about me. I have to do something.” (I’ve shared those same thoughts.) So, Sarai gets busy and gets handsy. She sends Hagar to Abram. He literally gets handsy and in time, Hagar gives birth to a son.

Enter Hot Mess and A Crazy

After the baby was born, Sarai acts ugly to Hagar.  All of Sarai’s unfulfilled waiting and wanting unleashed at Hagar and her son. Years of months of non-pregnant anguish poured out on a second-class woman, who was a pawn in this sad story. As I reflect on Sarai, perhaps some her bitterness also arises from the regret of trying to force God’s hand before His timing.

What do we learn from this part of Sarai’s life: There is never any peace or joy in trying to force God’s hand. Furthermore, we cannot wait in bitterness and disappointment and expect to develop patience.

Let’s turn our attention to the etymological ancestor of the word patience. It’s a word that we don’t use much anymore: LONG-SUFFERING. This following definition of this word blows me away every time I read it. Here it is:

Long-suffering is the ability to endure what God allows without complaint.***

Long-suffering highlights the idea that waiting is the necessary ingredient in shaping our character and faith. God uses waiting to  re-tool, re-shape and renew our character and faith. When we wait in a way that God desires, this means that we lean into our waiting situation and manage the intensity of our want and avoid the temptation to whine. Long-suffering (aka patience) is all about HOW we wait.

This means that we… 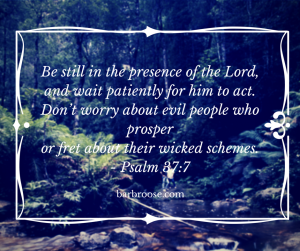 How does this feel to you? I know it’s hard. It’s hard for me, too. But, learning to endure without complaint is what produces the ability to endure trials, something we all deeply desire. Long-suffering gives back to us in so many ways! It is an anchor to our faith and a catalyst for our character.

Here’s what I’m learning these days about what God wants to do in me through developing Long-suffering:

As I learn to endure, Long-suffering whispers God’s promises to me daily. Pursuing God’s best puts my wanting into perspective.

As I learn to endure, Long-suffering reminds me of the big picture of God’s plan for my life and that diminishes my whining.

As I learn to endure, Long-suffering illuminates God’s strength within me. It gives me the conviction to look into another woman’s eyes and tell her “You’re going to make it.”

As I learn endure, Long-suffering fuels the smile on my face and the joy in my heart during stormy days because I know that God’s got my back and I won’t fall down.

References: If you would like more information about the background of a few concepts discussed above, you can click on these links. Still got questions? Send me an email at barbr@cedarcreek.tv
* – Proverbs 13:12
** – http://www.gotquestions.org/concubine-concubines.html
*** – http://biblehub.com/commentaries/galatians/5-22.htm