Emergency Underwear: How Did That Happen Again?! 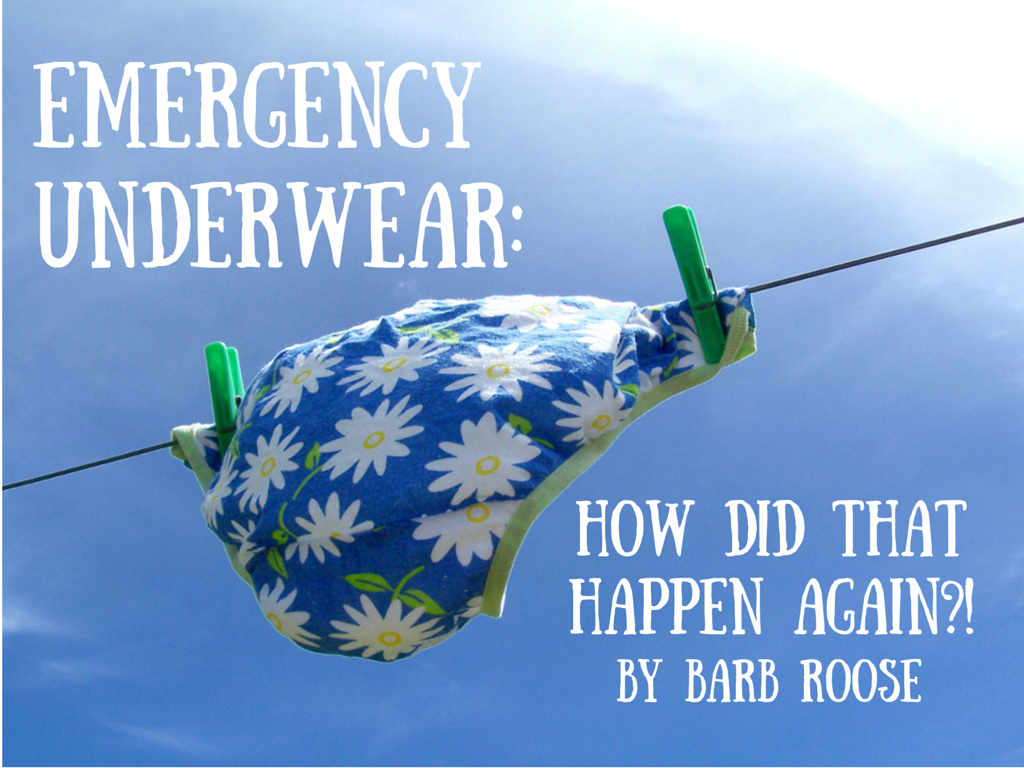 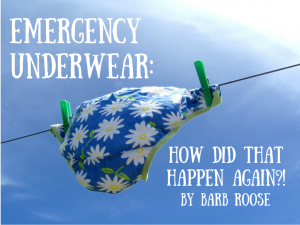 It’s Monday morning, you can guarantee that I’m struggling. At any point between 6:30am and 10am, I’m a cross between a walking hot mess and an incoherent toddler. All I want on Monday morning is for the clock to rewind back to Friday.

As I stumble through my morning toilette (pronounced “twaa-let” –I’m attempting to get fancy here), my body is on auto-pilot. I move like a robot from one movement to the next, praying that when I put my hand down to grab something, it will be waiting for me. Shower. Dry. Brush. Curl. Walk. Turn. Lotion. Socks. Underwear…Under—

Now, my eyes open and I’ve got a Monday-stopping question: WHERE are my underwear?!

Instantly alert, all attention focuses on my top drawer. It’s a little sparse in there. Gone are the typical piles of crumpled polyester-spandex and polyester cotton. All that’s left is a pair of once-loved undies crushed into the corner of my lingerie drawer. As the only clean, surviving pair of underwear on this early Monday morning, I bestow upon them following title: Emergency Underwear.

Yes, my last pair of underwear has a name.

While you may not name the last pair of your underwear, you’re already familiar with the concept. Emergency underwear is the last pair that you don’t like to wear. This is the pair that stays crumpled in the back behind all of your favorites or better performers. How’d your emergency underwear end up in the back of the drawer? Maybe they to shift to one side or another when you walk.  Perhaps they tend to get trapped in tight places, if you know what I mean. Maybe you no longer like the color or style.Whatever the reason, you don’t like this the pair of underwear –

…but you keep them around just in case.

For those who aren’t scared by a little TMI, this particular pair fits mostly fine. It’s an uninspiring shade of beige pair with a waist band that on its way to giving up. I don’t notice them in the drawer unless the more popular undies are cleared out of the way. Once that happens, then shazaam! It’s showtime!

So, my current situation: I’m standing in my last pair of clean underwear.

(I’ll be back to finish this after I get dressed.)

What makes me annoyed about the emergency underwear situation is that it should never happen. These moments are an embarassing reminder me of what I should have done, but didn’t do.

Apparently, I had doing laundry on the list of “I’ll get to that”, but I never got to it. I could make all kinds of excuses as to why I didn’t do it, but the fact is, I put off the task and almost had to resort to that oft-used, but never-talked-about college underwear trick that we used to use when we didn’t have enough quarters to do the laundry.

As much as I can, I try to live by the maxim “Set yourself up for success. ” And in these emergency underwear moments, I feel like a hypocrite. I’m always harping on my kids to set themselves up for success by planning ahead and taking care of their business. Yet, at times, their mama needs to practice what she preaches a little more often.

So, it’s time to kick myself in the butt! And since you’re along for the ride this morning with me, I’ll kick you, too. If that’s okay…

Time to Eat that Frog…

I came across an article discussing discussing 21 ways to stop procrastinating. One of those ways was to “eat the ugly frog first,” which is a euphemism from author, Brian Tracy’s book’s Eat That Frog.  When we have tough or unpleasant tasks to accomplish, Tracy encourages us to do our most difficult or unpleasant tasks first. Why? Because the most difficult task hangs over our heads all day long if it remains unfinished. Doing it first frees up mental energy and reduces tension. This leads to increased productivity and satisfaction.

How does that apply to my emergency underwear situation? Well, I hate doing laundry. So, when there’s piles of laundry laying around, there’s a tape in my mind that continuously reminds me that I’m a slacker until that laundry gets done. Yet, all of that mental badgering doesn’t motivate me to do the laundry. We erroneous think that if we ponder something enough, that we’ll eventually get motivated to do it. Not true. The only way to get something done is to – now, pay attention – is to ACTUALLY DO IT!

Whenever I actually get up and finish the laundry, it’s amazing how fast I get everything else on my list done.

My kids used to HATE unloading the dishwasher. We would go to war over unloading this dishes on a regular basis, until the day we timed how long it took to unload the dishwasher. It took 5 minutes. All of that procrastinating. All of that complaining. All of that fussing (me…). Once we figured out that doing the task only took five minutes, the kids don’t procrastinate the task as they used to. They’re happier because something they dread only lasts a few minutes and they can move on to something else much faster.

Think about the tasks that you hate? Make a list. Which tasks have gone unfinished for sometime now? Which one should you absolutely do today? Feeling overwhelmed at the thought of making that list? Check out the quick video below – it’s super helpful!

And me? Time to finish that laundry!

Thanks for stopping by Barbroose.com! If you think this post would be helpful for others, please share it. I’d love to hear if you were encouraged or inspired in some way. Just post in the comments section below or on Facebook. Blessings, Barb