Are You in Struggle Boat? 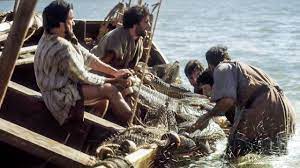 I’m finally watching The Chosen. I know, what’s taken me so long? If you’re not familiar with the television series, it’s based on Jesus’ life and the people who interacted with him. Like any other dramatized depiction of the scriptures, The Chosen isn’t trying to be a perfect replication of the Bible, but the series’ goal is to help us see the stories of Jesus in their proper context. It’s helpful for me to “see” the people that I read about in the Bible wearing clothes, living in homes, and eating food.

And, it’s also helpful for me to see their struggle.

In Luke 5, Jesus approaches Simon (later Peter,) who’d left his boat on the edge of the Sea of Galilee so that he could go wash his nets. Jesus asked Peter for permission to stand in his boat and teach the crowd who’d gathered on the shore. After teaching, Jesus told Simon to take his boat back out and let down his nets to catch fish (verse 4). However, Simon respectfully tells Jesus “we’ve been there, done that.” They were out all night fishing and hadn’t caught anything.

I don’t know about you, but as I read scripture, it’s easy for me to see Simon’s situation and not understand how big of a deal not catching fish was for him. While The Chosen dramatizes the personal lives of several characters, I was able to see into the tension and stress that Simon might have been facing. As a fisherman, his ability to take care of his family depended on whether or not he could catch fish.

Simon told Jesus that he’d been out all night. Think about that. Have you ever been up all night trying to fix something or figure something out? As I watched The Chosen, I ached for Simon because he frantically threw out one net, then another net. Next, he’d draw the nets in and hold them up into the light to make sure there weren’t any big holes where the fish could get out. As the night went on, I watched as he grabbed his hair, dropped his head into his hands and raged against the night because his nets were empty, but his heart was full of frustration and fear.

With all of that emotional turmoil, it took great faith for Simon to say to Jesus at the end of Luke 5: “But if you say so, I’ll let the nets down again.”

I don’t know about you, but when I hit my maximum frustration point, what I usually want to scream is, “I give up!” Yet, Simon doesn’t give up and storm off. He does what Jesus asks him to do. We’re not told whether or not Simon has a good attitude or if he doubts, all we know is that he says “yes” and he takes a next step.

If you’ve heard the story before, you know that a large number of fish miraculously appeared in Simon’s nets and those nets began to tear from the weight. When another boat came to help, that boat also filled with fish, so much that both boats were in danger of sinking.

Whenever it looks like we’ve got nothing, Jesus shows up and gives us more than we could ever ask or need.

Sometimes it looks like tangible provision and at other times, it looks like an abundance of peace, strength or comfort. Whatever it is, Jesus isn’t asking us to have perfect faith, he just asks us to take a next step of faith and trust that he will do the rest.

JOIN IN THE CONVERSATION:  Do you watch The Chosen? How does Jesus and Simon’s story encourage you today?