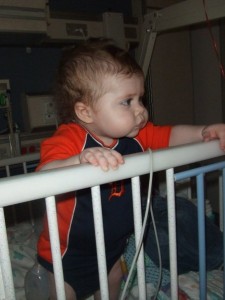 This weekend, I had a chance to talk about peace as the pathway to surrender. One of the stories I shared was about two CedarCreek.tv staff members, Luke and Sara Shortridge. In August 2009, their infant son, Jackson, was suffering from a rare pancreatic disorder that caused poisonous enzymes to leak into his body. Luke and Sara spent many months in the hospital with Jackson and even endured a child abuse investigation (they were cleared once tests revealed the defect.)

Yesterday, Sara sent me a note about this weekend’s message. It blessed me so much that I asked if I could share it with all of you, especially for those who are struggling with circumstances that are out of your control… 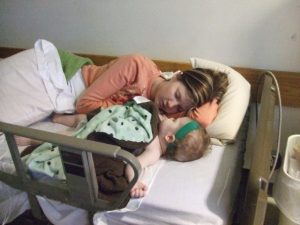 Sara holding a miserable baby Jackson close to her heart.

I’m humbled that once again our story could be used to reach more hearts for Christ. Yet, every point you mentioned was something I had to struggle through, or accept as truth through the Jackson saga. I can’t tell you how many times I felt like I was in a “fake it till I make it” stage. I would leave the hospital, where I had countless conversations with God basically me saying “If one more bad thing happens, I don’t think I can believe in you”…and then I’d head into church to teach elementary kids about how much God loves them!

Thanks, too, for sharing that it’s ok to keep on doing “normal” life things. I remember when it was still in the thick of things, and the women at Shamas in Perrysburg donated their talents so I could have a spa day. Hair, makeup, massage, the whole deal. I felt so guilty…like it was so wrong to be pampered while my son was still suffering. But, Luke (and others) reminded me that it’s ok to take care of myself. I think that’s such a valuable thing for people to hear.

I remember clinging to the truth of Scripture…and the saving knowledge that this life is not the end of the story. That the struggle we were facing was only a blink of the eye in light of eternity. It gave me much hope to remember that God had so much waiting for us. I really like the analogy you used with Eric Ward’s pictures. Being a visual learner, that really helped me to understand God’s perspective even more. 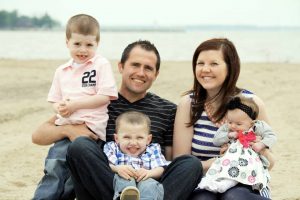 Luke and Sara with their children, Jackson, Asa and Atalaya

A practice I started during the Jackson journey was to listen to worship music, even when it was the LAST thing I FELT like doing. I can remember leaving the hospital, just to take a break from the madness, and being in such a crappy place emotionally and spiritually. I’d turn on KLove and hear lyrics like “You give and take away” and “Our God is Healer, Awesome in Power”. And I’d force myself to sing along. Boy, God sure does know how to wreck our hearts. But, focusing on God…and who HE is…makes our struggles so much smaller.

Life is so much different now, but every day brings struggles of its own. I will definitely be filing away the notes from your message to pull out when I feel like my struggles are bigger than I can handle…bigger than God can handle.

Thanks again for sharing your heart.

(If you missed this weekend’s message, CLICK HERE and you can watch.)