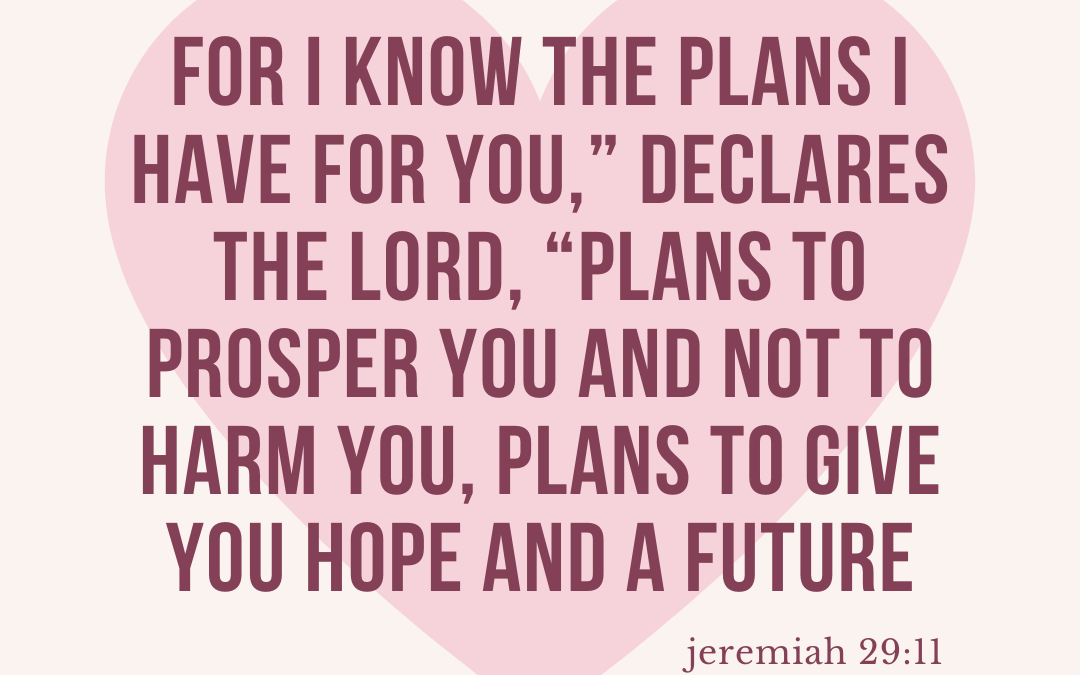 For I know the plans I have for you,” says the Lord. “They are plans for good and not for disaster, to give you a future and a hope.

Recently I have been working through Melissa Spoelstra’s bible study “Jeremiah,” The other day during one of our weekly discussions we were talking about the verse Jeremiah 29:11. While looking at the verse it made me wonder, what if our definition of “good” and “disaster” are different than his definitions.

It reminded me of my miscarriages.

January 2017, my husband and I went in for our twelve week ultrasound expecting to see our baby and hear his heartbeat, but that is not what happened. We found out that Francis, (we named all our lost babies to help give us closure) had no heartbeat and was measuring about 7 weeks. We were heartbroken and devastated. It did not feel like a good thing. It was heartbreaking, terrible, a “disaster.” We didn’t know how God could call that “good.”

After we lost Francis we decided to wait to try for another baby, because although we wanted that baby we knew we were not ready to be parents. In September 2017 we celebrated our first anniversary and decided that we were ready to start trying again.

At first we were having no success. Then, in March 2018, we had our second positive test. We went in at 6 weeks for an ultrasound. In my effort to manage my fear of another loss, I told myself things such like “if we hear the heartbeat early then we can do something to prevent losing this one,” and “if we find out early, it will hurt less if we find out there isn’t a heartbeat.” I didn’t want to start loving a new baby and feel that awful hurt all over again.

There was no heartbeat.

Or should I say heartbeats.

At that ultrasound we found out there were TWO embryos, but neither (Samuel and Veronica) had a heartbeat and both were measuring a week smaller than they should be.

It did not hurt any less finding out so early.

I was angry. I was in pain emotionally. Angry that God finally allowed me to get pregnant, only to let it end with a painful result. I didn’t understand why He allowed this pain and hurt to happen.

In my anger, I told myself lies such as if God let this happen, then He didn’t care about me. I began therapy. My therapist kept quoting Romans 8:28:

“And we know that God causes everything to work together for the good of those who love God.”

I kept asking her how this could be good? Why does God keep causing this pain?

My waiting room journey dd not get easier, later in 2018 we had another miscarriage (Jessee) bringing our baby loss to four. I struggled with my faith, asking God why we kept losing babies.

Barb was in the process of writing her I’m Waiting, God bible study. As her assistant, I had the opportunity to be on her pilot team that helped Barb put the study together. During the third week of the study there was a journaling exercise asking us to list truths we haven’t told anyone. I prayed and asked God what my truth was and He pointed out my truth was “I don’t want a baby, I want one of the babies I lost.”

That truth felt like a huge weight lifted because I realized that I was praying for the wrong thing. I had to let go of that dream – those lost babies –  and come to terms with the fact that I would not meet them in this lifetime.

While I was writing the journal entry, I heard God speak to me. I asked Him why. He reminded me that He allows some things to happen so that we may be brought back to Him. God wasn’t the cause of my loss. We live in a broken and sinful world where sometimes we lose loved ones.

A week after that journal entry, we received another positive pregnancy test. However, this time, we had a positive outcome. My husband and I welcomed Sophie to the world in September 2019 – just a week after the launch of the I’m Waiting, God Bible study.

So, how was my struggle “good”?

Looking back it was good that we did not have a baby at that time. Am I happy we lost any of those babies? No. Do I wish that having multiple miscarriages were not His plan? Yes.

God knew the plans He had for me.  If we had had a baby at any of the times we were pregnant, we would have struggled a lot financially. While we were waiting, we paid down a lot of our debt which allowed me to work part time so that I could be home with Sophie more.

The biggest blessing of His delay was that He brought me closer to Him. God worked these losses for my good. My faith was just coasting, doing the bare minimum, but through my losses I turned toward Him. I came back to Him. God knows the plans He has for me.

His plan was good. He gave 2017 Katherine a future where she was able to spend her time with her baby, a deeper relationship with Him, and compassion and relatability she would never have had otherwise.

For those things I am grateful to God.