What Honduras teaches me… 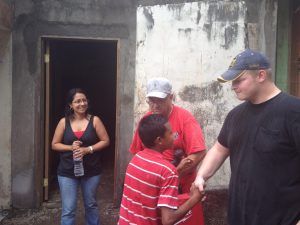 Today, I got to see two lives changed right before my eyes. Steve is the gringo (aka young white guy) in the photo.

He’s a young buck who decided in February to go on a missions trip. All he knew was that he wanted to come to Honduras and help people. but, once he met the people he came to help, Steve’s view of the world was radically changed.

For three days, Steve and his construction partner, Tim (a missions veteran) sawed, sanded and built bunkbeds in a workshop in the heat and stifling humidity. This afternoon, some of our team went along as Steve and Tim delivered the beds.

Meet Manuel. He is in the seventh grade and lives with his mother. His dad took off for the United States years ago and hasn’t been heard from since. Manuel’s home is adjoined to his aunt’s home. Both women was single mothers trying to raise their children in conditions that we cannot imagine – and probably could not endure.

After the bed was placed, Manuel, his aunt and our team stood around the front steps for the dedication. The CDI director, Heather, and our missions team host, Vilma, explained to Manuel that our team raised the money for the beds. They also explained that Steve and Tim were responsible for building the beds. Our eyes welled as Manuel made his way over to Steve to give him a big hug. Then, young Manuel made his way around our group hugging us and thanking us for raising the money for his bed. It was an epic humbling moment. In fact, we didn’t feel we deserved to be thanked. Afterall, it was just a bunk bed, right? Why should this young man thank us for something we gringos take for granted?

Except this young man didn’t have a bed of his own before today. And his gratitude gently reminded us that the smallest gestures of kindness can have tremendous, life-changing impact. 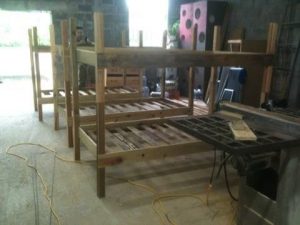 Here are the bunkbeds that Steve and Tim built.

The expression on Steve’s face touched my heart as he looked into the face of the young man who would no longer need to share a sleeping space with two, three or more family members. Steve was working hard to be a dude about the emotional situation, but some moments are just too big not to let a man-tear drop. Manuel now had a bed because Steve showed up and built it. Two lives were changed and if our prayers are answered, both of these young men’s lives will never be the same.

Our next stop was to Claudia and Evelyn’s home. I’ve met Claudia on my first trip to Honduras. She’s a bright, kind, young girl, now in the seventh grade. By the time kids finish elementary school, continuing to high school is an expensive pursuit – especially for families that make less than $300 a month. High school isn’t free. And over 80% of the kids at the center are from families that make waaayyyy less than $300 a month.

Yet, Claudia has a monthly sponsor to help cover the cost of her high school tuition and supplies. Other girls in her neighborhood don’t get such a chance. Semi-educated girls have woefully few opportunities and most end up pregnant before 18 years old. 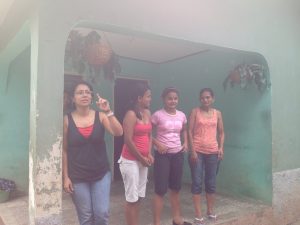 Vilma is telling us about Claudia and Evelyn during our visit to deliver their bunkbeds. Claudia was stunned when she realized how high in the air her top bunk was.

I have hope for Claudia. I pray that she keeps coming to the center so she can keep her sponsor. I hope that one day, she will come back to her neighborhood and tell a different storyline to the young girls – that they can have hope – and that God (not the government) will send someone to help them along the way.

After driving around a large neighborhood called “Buffalo,” we drove up a big hill. Heather pointed out that a political party paved one lane of just about 100ft of rocky hill road and bragged to the community about capital improvements. IMO, I think they should have paved the other lane before tooting their own horn…

Anywho…our final home visit was to Adrianna and Dunia’s home. Their mother, Carmen, had just moved into this home on the hill after leaving a physically abusive marriage. An uneducated, Honduran woman has literally no options in such a situation, but Carmen did have a twin sister. Carmen snuck away for her home with nothing, but her life and her children.

At one point, her husband showed up at her sister while drunk and swinging a machete, but thankfully, he did not get into the home. Vilma shared Carmen’s story. we could see the evidence of Carmen’s battered wife’s syndrome – withdrawn, fearful, depressed, anxious… Yet, the folks at the church invited her to volunteer with the kids at the center. Over the past three months, Carmen has started to speak a little more and Vilma reports that Carmen has even smiled once or twice.

In the US, we have lots of debates about what poverty really looks like. Folks, this is poverty. We might have high unemployment and declining tax revenues, but let’s not confuse that for poverty. 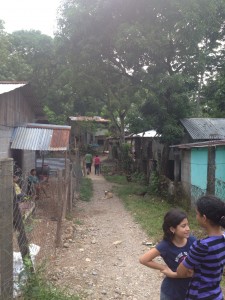 This was the entrance to the neighborhood where our team worked on a new cement block home with a concrete floor for a deserving family.

Yet, while those we visited in pressboard homes with dirt floors may have not had much in the way of material wealth, they possessed an enduring spirit in the face of great challenge. When asked how they are doing, their universal response is a smile and the word ‘bien,’ which means ‘good.’

Could we say the same? Could we wake up in homes with dirt floors made muddy after winter rainstorms and still say we are going good? Could we toil for hours each day in oppressive sun and humidity for a few dollars each day and say we are doing good? Probably not.

Every time I come to Honduras, God teaches me life lessons that I could NEVER learn at home. The language of love is spoken here and through our Honduran friends, we experience tremendous generosity, kindness, hospitality and we witness their unshakeable faith that transcends language barriers and cultural differences. Even though I come to serve, I always leave much richer in heart and spirit than I ever deserve.