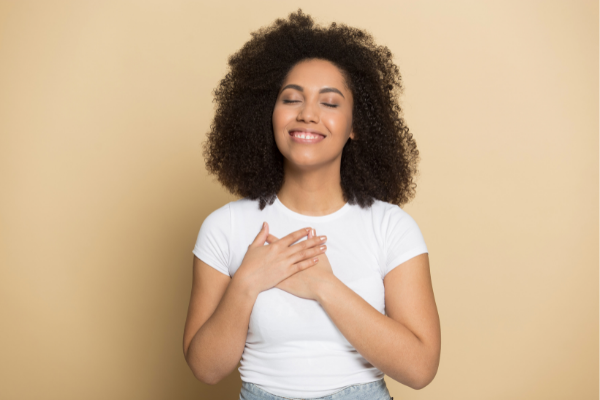 Have you ever heard the story about my grandmother Magnolia’s blue eyebrows? It’s one of my FAVORITE stories ever! There’s a video below where I share that hysterical story! But, in honor of Mother’s Day, I’d like to tell you another story about Grandma Magnolia. Her painful circumstances and radical step of forgiveness not only changed me, but in many ways, saved my life.

My grandparents had a toxic relationship filled with shortcomings on both sides, including my grandfather’s long-term infidelity and my grandmother’s not-so-calm reaction to it. Back then, everyone on the black side of my little hometown knew what was going on, and it was traumatic for everyone involved, especially my mom and aunts. My grandparents divorced just before I was born, but the wake of the affair and divorce sent my grandma into what we’d now call a mental health crisis that destroyed her physical health.

Most of my early memories of Grandma include visiting her in the hospital. She suffered from bleeding ulcers and a myriad of physical issues that were likely connected to her emotional distress. She also waged a quiet, real prescription drug addiction to cope with her pain.

In time, things began to change. It began with Grandma changing first. Grandma was a Christian, but there was a renewal of her decision of follow Jesus. Part of that decision included let go of her anger and bitterness toward my grandfather. That decision would change the trajectory of all of her family’s lives.

One day after school when I was ten years old, I visited Grandma. I soon realized that my grandfather, her ex-husband, was resting in her bedroom. I generally only saw my grandfather on holidays, even though we lived in the same small town. He’d had hip replacement surgery and had nowhere to go.  Grandma took him in and cared for him while he recovered. At the time, Grandma and my aunts lived in a two-bedroom apartment. Granddaddy stayed in Grandma’s room, and she moved in with my aunts.

After Grandma nursed Granddaddy back to health, he began to appear in our lives more often. He’d visit my home a few times a week and showed up at family gatherings. Not only did I get a chance to get to know my grandfather, but over the years, I saw my grandfather change, too. In my adult years, I overheard my grandfather quietly ask my mom and aunts if my grandmother needed anything. He slipped them funds to help Grandma with car repairs or to buy something nice for her birthday. While the past still reared its ugly head at times, forgiveness helped to hold our family together until we could find a bridge through the pain and move forward together again.

Within days of my grandfather passing away many years later, my grandmother told me: “Barbara, the single most important decision that I’ve ever made in my life was to forgive your grandfather.”

My grandmother passed away in January 2009 from pancreatic cancer. The church was filled with people who came out to honor her. This 75-year-old woman was well-known because she loved everyone so well. You’d never know that Grandma had survived two divorces, rape, racism, infidelity, a prescription drug addiction and more. All anyone saw was the love of Jesus that shone through her life.

Just to be clear:

But as I write in my Surrendered Devotional,

“As much as we know that we should forgive, the barrier to our forgiveness is pain. Our painful memories scream ‘They should have to pay for this!’ Yet, Jesus shows us how we can forgive, even in the midst of our pain so that we can experience God’s healing and restoration in our lives.

Did you get that? Jesus forgave out of his pain. Jesus didn’t wait until after He was resurrected and pain-free. He extended forgiveness as the blood flowed from the crow of thorns atop His head and the spikes that split his skin. Most remarkably, Jesus forgave even though the people weren’t even sorry.”

In this season of Mother’s Day, chances are there are a lot of wounds that either ooze or reopen as we deal with the memories of the past or the circumstances of the present. I see you today if you’re dreading this Sunday’s holiday. You aren’t alone. I wanted to share my grandmother’s story in hopes that if you are on a forgiveness journey, or you’re considering it, forgiveness is a step that you’re never regret. In many ways, forgiveness is a form of surrender because you’re trusting God will make right more than you’ve been wronged.

COMMENT: Is there a Mother’s Day-related situation that needs your forgiveness? What’s hard about forgiveness for you right now? If you have forgiven, how has that blessed you or brought healing into your life?