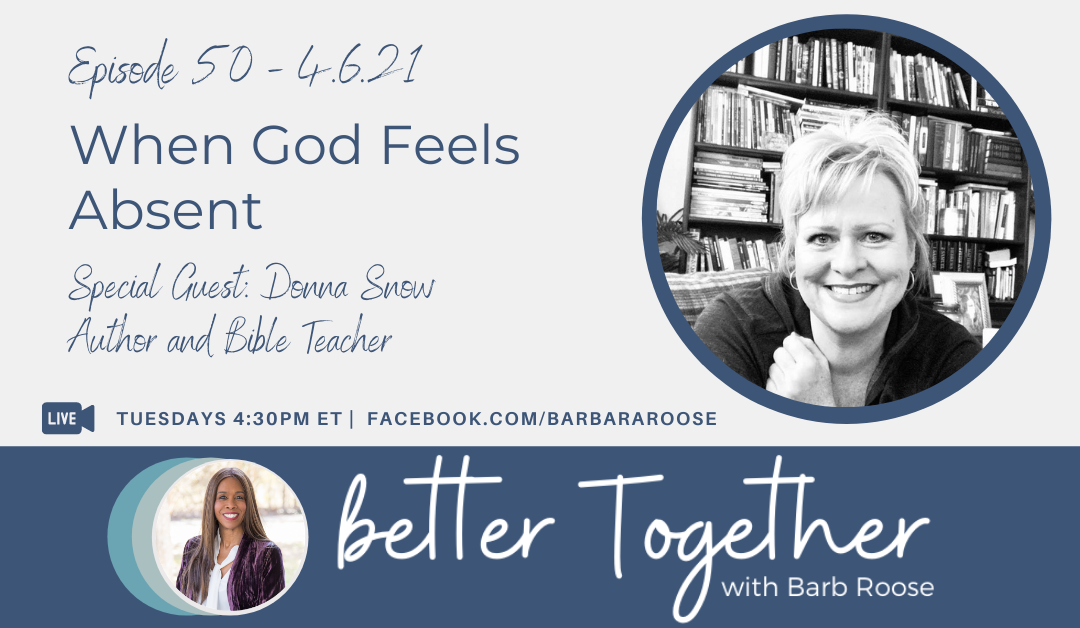 When we are walking through tough times, it can be easy to feel like we are alone or that our prayers are hitting the ceiling.

Join host, Barb Roose, and author and Bible teacher, Donna Snow, as they talk about three ways we can know that God is present in our circumstances, even if He feels absent.

1. God is never mentioned, but His fingerprints are everywhere.

Although we never read God’s name in the book of Esther, we can see that He is at work in all of the events that transpire. Donna explained that Esther could not have gone from being an orphaned Jew to the Queen of Persia on her own. Only God could have done this! When we cannot feel the presence of God in our lives, Donna encourages us to spend some time journaling and writing down the promises of God to remind ourselves of the truth. He loves us, cares for us, and is deeply involved in our stories.

2. Esther is not a fairytale as some people think. It’s a historical book that is closer to a nightmare than a Cinderella story.

Esther’s story is not as neat and pretty as some storybooks make it out to be. Donna explained that Esther had about a 1 in 400 chance of becoming queen. After spending one night with the King, if she had not been chosen, she could never get married and would have to spend the rest of her life in the harem. However, Donna also reminded us that sometimes the areas where things do not look great is where God needs us the most.

In the book of Esther, Haman passed a decree to destroy all of the Jews, but Mordecai’s law was able to defend them. In God’s narrative, when Adam and Eve sinned, God decreed that all of us would die. However, on Calvary Jesus wrote decree number 2 with His death that promised eternal life for those who put their faith in Him.

About Our Guest Donna Snow

Donna Snow has authored over 35 Bible studies, numerous magazine articles, and travels throughout the United States and internationally to teach from Scripture.

She has published five books through Concordia Publishing House. Her sixth book, a full-length Bible study based on the book of Esther, released on March 2, 2021. Donna has also authored four DVD Bible study series in partnership with the Lutheran Women in Mission, which were taught before live audiences.

Donna is a life-long Texan and coffee lover. She is an adventurous traveler, avid reader, dabbling gardener and closet chef, but home is always her favorite place to be.

Chosen: A Study of Esther

Better Together host Barb Roose is a popular speaker and author with a passion to help women live beautifully strong and courageous in Jesus’ name. She’s the author of multiple books and Bible studies, including Surrendered: Letting Go and Living Like Jesus and Joshua: Winning the Worry Battle. Visit Barb’s online home at barbroose.com.